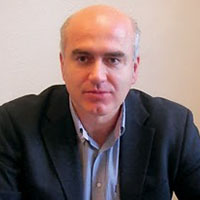 He holds a Bachelor of Science in Mathematics and a Master of Science in Statistics and Business Research from the Aristotle University of Thessaloniki.

Ηe was elected Regional Governor of Eastern Macedonia and Thrace in October 2016.

In April 2016, during the 10th national convention of New Democracy, he was elected member of the party’s Political Committee.

For many years he has worked as a mathematics instructor and also for his family business in Rodopi.

He is married and father of one daughter.